“Only five more minutes to the next signpost!” … Kept David saying for at least an hour. We were on our way to the Schesaplana hut. While plannig our way to the meeting point with Flo, Markus and Lorena we found that it´s a good idea to go straight over the mountains instead of taking a train around. Of course we planned as careful as usual! So I recieved a message with the tour details from David, right after I booked my train: 2500 hight metres, 11 hours to catch a train at 9am! I think we need to change the plan… Eventually we did this tour, but hiked most of it the day before and stayed at Schesaplana hut over night. The next morning we woke up before sunrise to catch our train. It was such a strange feeling to start riding downhill in the dark, in the middle of the mountains, knowing that we have to be at the train station in three hours. No time for breakfast and no time for playing around. So I started riding slowly and carefully, thankfull for the moon to light my way… I forgot to bring my torch. After a short downhill section, it was time to hike uphill for a while. I wasn´t fit at all. It was just too early for me. Anyway, the sun began to rise and so did my mood. Slowly taking step by step we reached the pass – to late to ride the loger way with good Muni sections. So we went down the gravel road and reached the train station just when our train arrived! Such a good timing before breakfast!

Already pretty exhausted we met the others in the train to start a intense Muni hike in Wallis!

Luckily our first day was pretty easy, we had a quite long train ride and then rode to Turtmannhütte. On our way we passed by a glacier lake – of course we took a bath 😉

In return, the next day was the toughest day of the tour. In the morning we started hiking up the Barrhorn (3610 hm). It was the highest mountain I ever unicycled. I imagined the hike up to be super intense, but somehow I was fine on the way. Especially when I saw the summit, I ignored my lack of oxygen and continued walking till I reached the top! What a feeling! We had a great view over glaciers and other summits – and best of all: we were at the start of a great downhill ride! First I was a bit shaky till I got used to the terrain, but then it was just the best feeling! Riding a perfect downhill section while looking at the glacier in front of me! Not sure if I ever had such an intense ride! I didn´t want to stop at all! One hundred percent focussed we rode down the Barrhorn. The mountain offered such a variety of difficulties, combined with even better views. After a short lunch brake back at the Turtmannhütte, the really tough part of the day began. We had to find our way through a valley and hike up a mountain pass to find the hut for the night on the other side. After lunch I was so tired and exhausted! But there was still a long way to ride this day. So we continued with the downhill, trying to stay focussed, my legs complainig at each smaller drop. After a while they got used to it and the downhill began to be fun again! Passing by some fun sections, we reched the end of the valley. Nevertheless, this was not the end of the day. Now the hike up the mountain pass began. Everybody was pretty exhausted yet, but there was not an option to quit. We all wanted to reach the hut before dark. So we continued walking, Flo, David and Lorena without shoes to have a change in the walking style 😉 The effort was worth it: When we reached the highest point, there was another downhill section in front of us! The trail compensated all the uphill frustration! It even started to rain a little, so we were riding through a beatiful rainbow! Shortly after the rainbow ride we passed by another lake and went swimming in the rain. It was such a good feeling to get my body cooled down a little after all the exertions during the day! The only problem: we still didn´t reach the hut and it began to start raining more heavily. This last part was the toughest for me on that day. I was wet and cold and exhausted and we weren´t too sure about the way. It took us another hour of unicycling in the rain to find the hut. We reched threre just before the dark! But there was a surprise waiting for us: hot showers! I don´t think a hot shower felt ever that good before!

The next day we had a lazy morning with lots of blueberries and lakes on the way. There was even a boat to rent! We just had to lift it over the post it was attached to 😉 After playing around at the lakes for a while, Lorena had to leave us for her university classes 🙁 luckily she had a great downhill in her way to the valley! Flo, David, Markus and I started hiking up the (K)illhorn. They forgot the K on all the signs, so we had to add the right singn:

The way down from the Illhorn to Sierre offered a more than 2000 hm long downhill! It was without interruptions a perfect downhill till we reached Sierre! I enjoyed especially the first part right after the summit! It was super technical at a perfect level for me. I had to fully concentrate but was able to ride all of it! I couldn´t get rid of my muni-smile all the way down! Even tho after a while my legs started hurting and concentrating became more difficult. Luckily the following parts were slightly easier than the beginning! Just being at this beatiful trail, seeing the others laughing while riding made it a perfect day!

In the evening we reached a campsite – again completely exhausted! Markus was organizing the check-in while David, Flo and me weren´t able to move anymore, just laying in front of the reception. What a great day!

After having a really good night in proper beds we took a cable car up a mountain the next mornig. It was a lovely change to start the day sitting in a cable car and enjoying the view. The rest did´t take too long tho, it was still a tough hike after leaving the cable car. We took it slow this time and played around a bit. There were super cool Muni spots on the way! 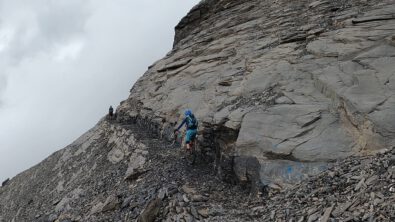 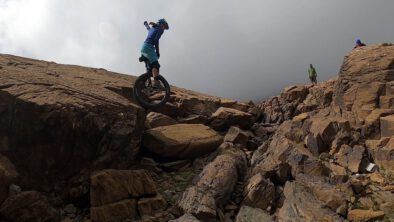 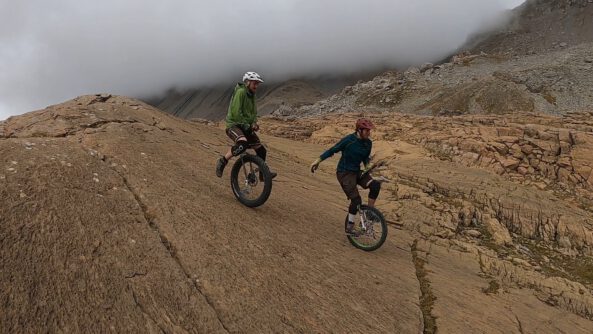 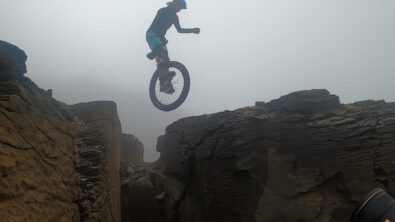 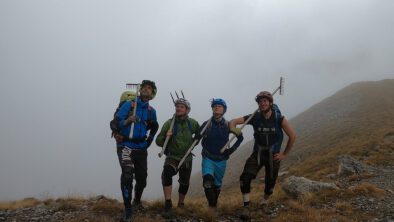 It became super foggy in the afternoon and we were pleased when we reched the hut. First we thought of going for another hike before dinner, but then it was just too cosy at the hut and we played board games instead. Just in time for sunset, the fog faded away to give a a beautiful view:

On the next day I really didn´t want to leave the hut! We woke up pretty early, so it was super dark outside, cold and raining. And again, I didn´t have a torch. But there was no choice, we had planned a long tour, so we had to start early and I had to step outside the cosy hut and start riding. I wouldn´t have believed it, but after only five minutes I began to smile again! The downhill was so good! The others helped lightning my way and somehow I even started to like the rain and the storm. I felt so strong riding down in the dark while it was rainy and stormy! I began to smlile and couldn´t stop laughing all the way down! It was such a good feeling! Soon the sun was rising and we saw chamoises on the way. After a while even the rain stopped and we enjoyed the ride and the view!

With a brake to fix Markus´Uni we rode down all the way to the valley. He dropped it on an exposed section. I was too afraid to ride it, but Markus and David made it! After a shor cable car ride up to the other side of the valley, we went uphill again. Usually I´m the slowest when hiking uphill. This time we could hear thunder and saw heavy rain and lightnings at the other side of the valley, heading right toward us. This made me hike super fast! After around two hours it began to rain and was super stormy. I couldn´t see a lot and with every step I was afraid the wind would push me down the mountain. The only thing I could think about was: what if we won´t make it to the hut before the thunderstorm reaches us? But there was nothing I could do apart from continue walking. Step by step, hoping that the wind wouldn´t blow me away, trying to stay close to the others. When I was completely wet and cold, we reached the pass. On the other side it way like in a diferent world! The rain was way less and it wasn´t windy any more. After a short brake we continued our way, riding this time. After a while we found a stone bridge where we stopped for some photos. The way up to the bridge was super steep and I nearly didn´t make it! We reached the hut just in time before the thunderstorm reached us! For dinner we had a tasty cheese fondue and a hot shower again! At night I woke up beacause it was super loud in our room… I looked outside and there was a heavy snow storm going on! Such a beautiful surprise! The next morning we went outside and had a snowball fight! First snow this winter! Because of the weather we decided to finish our trip and rode into the valley to go back home by train. On that last downhill, Markus broke his pedal and Flo broke his seatpost. Luckily no human got hurt on this trip!

It was a beautiful last downhill! And I felt that my body was ready for some rest days. I extended my limits on that tour, mentally and physically. It was good to see how much more my body can do, when there´s no choice. And I was fine! Doesn´t matter how impossible a daily goal sounded, I made it. And most important, I had fun even when I was reaching my limits. It´s a great feeling to wake up in the mountains every day and continue walking. Knowing that my body can do this, knowing that we will reach the next hut, knowing that there will be a great downhill eventually!

Thank you for this great experience Markus, David, Flo and Lorena!

Thank you for providing me a unicycle I can always rely on, Kris Holm Unicycles! 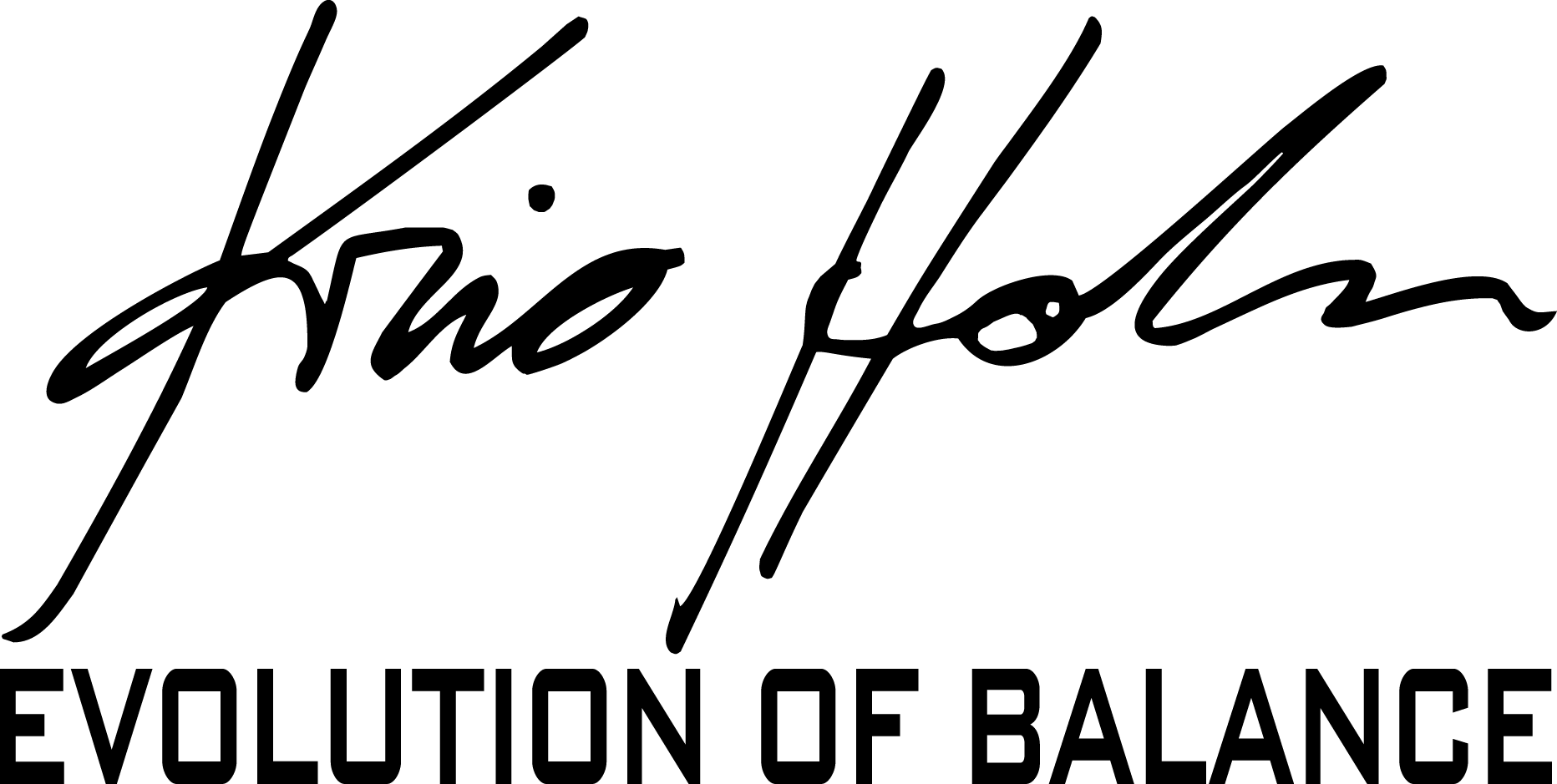 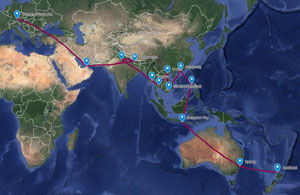